ISLAMABAD: Pakistani actor and comedian Umer Sharif is still in a critical condition and is not showing signs of improvement despite continued treatment, his son Jawad said Monday.
A private news channel reported, Jawad, citing doctors, said his father’s heart disease is worsening.
If he is not sent to the US [for treatment], he will have to undergo open-heart surgery, Jawad said, sharing that his father did not recognise anyone even after regaining consciousness for a few minutes.

He appealed to the nation to pray for the recovery of his father.

Farooq Sattar visits Umer Sharif in hospital
Political personalities are continuing to visit Umer Sharif, with the most recent visit made by former Karachi mayor Farooq Sattar.
A picture of the visit was shared on social media by a Twitter user.
Father suffers from heart disease: Umer Sharif’s son
Pakistani comedian Umer Sharif has been unwell for some time now.
According to his son, Umer is suffering from a heart condition and is undergoing treatment.
Earlier, a video of the comedian seeking help from Prime Minister Imran Khan for his treatment had gone viral on social media.
Centre forms board to decide whether Umer Sharif must be sent abroad for treatment
Governor Sindh Imran Ismail and Federal Minister for Information 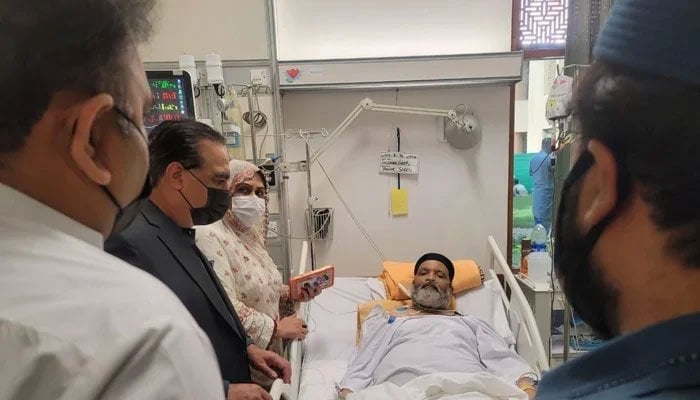 Earlier, in Karachi, Sindh Governor Imran Ismail and Federal Minister for Information Fawad Chaudhry also visited Umer Sharif at a private hospital.
Talking to the media, the federal minister announced that the federal government has constituted a medical board for the treatment of well-known actor Umer Sharif, which will decide on sending the actor abroad.
Read more: No plan to go abroad for treatment, says Maryam Nawaz

Syeda Tuba Aamir announces that she is taking Khul...

Federal govt employees to get 15pct disparity allowance from...

Syeda Tuba Aamir announces that she is taking Khula from Aam...

Salman Khan receives ’Personality of the Year’ award in ...